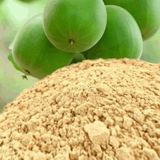 Luo Han Guo (LHG) is the sweet fruit of the plant Momordica grosvenorii Swingle, a vine which grows in certain regions of China – South China, mostly in Guangxi and Hunan. The sweet character of the LHG fruit arises from the presence of extremely sweet terpene glycoside noncaloric compounds (called Mogrosides), which are natural components of the fruit.

The LHG fruit has a long history of use in China and South East Asia as a food, beverage and a traditional medicine for more than 300 years. According to The Encyclopaedia of Traditional Chinese Medicine (Jiangsu New Medical College, 1977), the fruits were reported as frequently used as the main ingredient in “cooling drinks” or “cooling tea”, and these drinks have been used as a common household treatment for colds, sore throats and congestion of the lungs. The Chinese Book Fruits as Medicines (Dai and Liu, 1986) reports that the fruits are used for heart stroke with thirst, acute and chronic throat inflammation, aphonia, chronic cough, constipation in the aged and as a sugar substitute for diabetics.

While the LHG fruit has been consumed for many years, it was not until recently that a process was developed to allow production of a stable, good tasting LHG fruit juice concentrate and Powder extracts. Botaniex’s process removes many of the off-flavors that may be found in fresh LHG fruit, such as earthy, beany, vegetable and/or bitter flavor notes. As a result, a LHG concentrate is produced that can be readily incorporated into a broad range of food and beverage products, and the powder extracts can be used as flavour enhancement and/or food additives. It is an ideal substitute of artificial sweeteners and other herbal sweeteners because of its intense sweetness but low caloric content.Luohanguo is collected as a round green fruit that turns brown upon drying. The sweet taste of Luohanguo comes primarily from Mogrosides, a group of terpene glycosides, present at the level of about 1% of the fleshy part of the fruit. Both the fresh and dried fruits are extracted to yield a powder that is 80% or more Mogrosides. The Mogrosides have been numbered, I-V, and the main component is called Mogroside V, previously known as esgoside (see chemical structure diagram below). Other, similar compounds from Luohanguo have been labelled siamenoside and neomogroside. The mixed Mogrosides are estimated to be about 300 times as sweet as sugar by weight, so that 80% Mogrosides of the extracts are nearly 250 times sweeter than sugar. The pure Mogrosides IV and V may be 400 times as sweet as sugar by weight.

Botaniex is the manufacturer and supplier of natural ingredients for the Industries of Dietary Supplements, Functional Foods, Functional Beverages, Cosmetics and Pharmaceuticals.